Truth renders its services for preparing an action plan (an executive plan) according to the articles of association, the memorandum of association, and the detailed feasibility study. The action plan prepared by Truth necessitates knowing the general manager responsible for running the company, his experiences, and qualifications (the project) in order to guarantee effectively implementing the plan and achieving the targets.

Actually, many experts, scholars, and explicators have tackled several and diversified definitions of action plan, its meaning, why it is prepared and for whom!..

These studies and their results undoubtedly added considerable experiences to Truth and enriched its library and archive. Hence, Truth developed a distinguished character in terms of the style and management of such studies. Furthermore, Truth’s wide experience in running the economic projects, whose construction and execution were the responsibility of Truth until being handed over to the department appointed by the projects’ owners, has a considerable effect on developing executive plans for such projects. As a result, our introduction to defining the action plan, its purpose, and how it is prepared will largely depend on practical experience and slightly on the academic part.

In witness whereof, we present hereunder a detailed explanation of the action plan concept according to the following points:

I. The Action plan concept

Without reviewing the opinions of researchers, explicators, and experts about the action plan concept , we will review this concept out of our accumulated experiences –as above-mentioned- hence, we give the researcher- or the reader- the freedom to access to those opinions, which thought by some people they have substantial differences. However, we are nearly positive that this difference is in form only – i.e. in formulating the concept- but as for the content, it is agreed upon by all the explicators, researchers, and experts.

The action plan concept in light of Truth Economic Consultancy’s experience and experiments:

It is a document that comprises determining and setting goals, and the style and method of running a group of production or service activities that should be done to achieve those goals.

This is the action plan concept as seen by Truth. This concise definition can be grasped or fully embraced only by experts and academic consultants or those who previously developed action plans. In order to fathom this definition, we have to cast clear lights on some points outlining and explaining this definition. We should address it as follows, with the action plan of a factory of buses for industry as our model to explain what we mean:

1- The action plan is a semi-official document binding on the officials in charge of executing it.
2- The action plan shall be prepared by specialized work team assigned by the project owners or management upon the recommendation of the board of directors or the executive committee. This team shall include a specialized elite from different fields according to the project nature.

If the project is industrial, the work team shall include the following specializations:

3- The action plan shall be prepared for the existing projects that are actually in production and the projects which are still under study or execution.
4- In light of the previous definition of the action plan, it turned out that it is necessary for the work team to do the following in order: 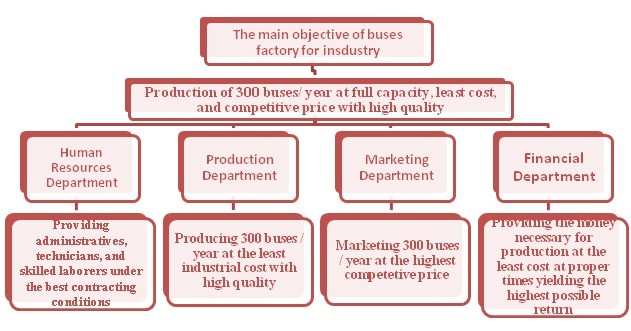 II. The Purpose of the Action Plan, Why and for Whom it is Prepared?

The main objective of the action plan is:

1. Reaching (or writing) a guide for managing a factory of buses to cover all the production operations and the other supplementary activities, in which the objectives are outlined clearly and the method and mechanism of the work of each department are indicated in order to achieve the sought objectives.

2. Having a benchmark by which the degree of the department’s success in achieving the objectives is measured.

3. Statement of deviation, be it positive or negative, between what is actually achieved and what is planned in the action plan.

The plan is basically prepared to be submitted to the project owners in the first place to be discussed in detail, then endorsed and approved and filed to the public department, to abide by its content and achieve the fixed objectives, which in turn shall take the following actions:

III. The Way (Mechanism) of Preparing the Action Plan

The way and mechanism of preparing the Action Plan is the method that should be followed in the production operations and the other complementary activities to achieve the objectives. We can call it the (know-how) in preparing the plan which differentiates a plan developer from the other. In all cases, the action plan should – and has to- present all the elements that should be included in the action plan, which are the following:

2- The Plan Summary
3- The Work Conception:

6- At the time of work, identifying the following:

7- The Plan Summary
8- The Objective of Writing this Plan:

11. Holding the department accountable in case of its failure to achieve objectives and its negative deviation and the reasons for so.
12. Setting the appropriate solutions for overcoming the reasons for non-achievement of objectives.
13. Financial review of work:

Each employer has to explain his plan in the best way that reflects his work. It must be noted that the written plan of a new work is somehow different from the written plan of an existing work. Some elements of the action plans of the existing projects cannot be applicable to the action plans of new works, even though some people (the professionals) are capable of executing a sufficient action plan for any work whether be it a new or already existing.